sed - a Stream EDitor
sed is a UNIX utility which processes a text file one line at a time. It has RegularExpression based string manipulation, a hold buffer, and some basic flow control. Amazing things can be done with these BearSkinsAndStoneKnives.

Yes, I guess sed is a stone knife or bear-skin, in that it's one of those ancient1 Unix utilities with a reputation for being powerful in the right context, but a bit difficult to wield. Whether or not the reputation is justified, it's good to know a little about sed because it's everywhere in Unix/Linux, and it proves useful in many situations.

My main use case for sed is when I find myself thinking, "Gee, I just need to run a regular expression over this file or bunch of text."

In addition to replacing, it can delete certain text or lines, or insert blank lines. The way sed changes files is called non-interactive editing: all change instructions are defined up front, and then applies them to the input, line by line.

This makes it suited to be part of shell scripts or other automated workflows, and handy for one-time changes such as data cleanup.

How to learn sed

Check out Sed Examples by Sasikala for a nice overview of sed features and uses. Each of the posts contains examples organized by feature and command, which makes it easy to find something specific to the task at hand.

There's a Digitalocean tutorial: The Basics of Using the Sed Stream Editor to Manipulate Text in Linux. However, it's my opinion that some of the best sed info is found on websites of a certain vintage:

Here's a simple example for replacing a certain string value in some data. Given a text file:

Perform the substitution on all lines of the original file with command s, and pipe the output to a new file:

The new file looks exactly like the original file, but with our phrase replaced:

I encountered some wild Pokemon data that needed a bit of cleanup:

As the sample shows, the property values in stats are formatted as strings, and some are numbers. It's not only defense and speed, but all of the stats are formatted inconsistently throughout the file, which makes the data less easy to use. It's possible the database or import script could coerce the values for us, but let's make changes to the source file itself so that the data will be consistent no matter how we use it.

Here is the incantation to sed:

In practice, the full command would also indicate the original and output filenames, as seen in the simple replace example earlier in this post. The end result is that all number values are represented as Numbers, not Strings, except for those properties where string representation is appropriate for number-like values.

Bottom line: it's good to know about sed, what it does, and how it can be applied to everyday problems. It's a widely available utility, worth keeping in your Unix toolbox, even if it appears at first to have all the user-friendliness of an old flint blade.

I made this app that renders a Seal of the Commonwealth of Kentucky in SVG. The motto can be updated, and the generated Seal can be saved in PNG format. These notes cover a few implementation details for how to edit and save an SVG image with JavaScript.

This project really got off the ground when I found this SVG Seal of Kentucky. The image is in the public domain, so I downloaded it and removed the original motto text shapes. Thanks, Wikimedia Commons!

Next the SVG gets some new nodes to contain the custom motto. The attributes text-anchor="middle" and startOffset="50%" together keep the motto where it should be centered on the paths:

The other important textPath attributes are its id, used by Snap to update the motto contents, and xlink:href, which links each textPath to its path definition. 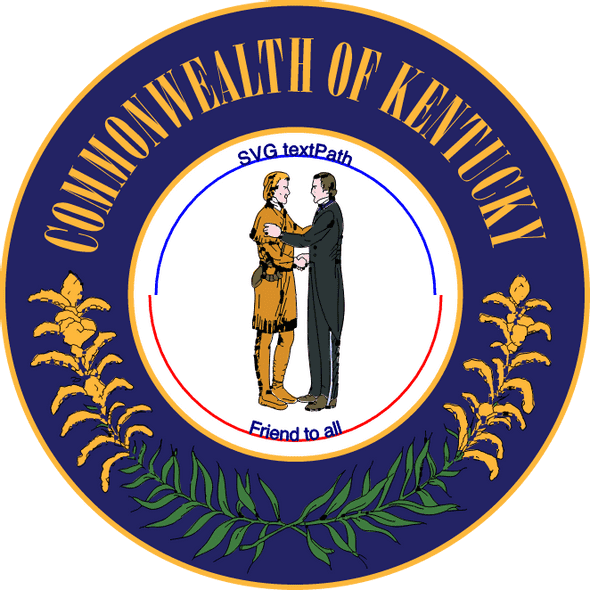 Snap.svg will help display the seal and edit its motto. The first task for Snap is to load the blank Seal SVG from an external file. Contents will be added to the empty SVG element on the HTML page with id svg_home:

After the image is loaded, Snap wraps the SVG element and allows the textPath nodes to be identified:

Finally, the motto can be updated by setting #text attributes with Snap, suitable for wiring to an input event listener function:

Setting up the motto live-editing was easy with Snap, but saving the result isn't as straightforward. Even if you get the source of the SVG, it's still in SVG format, which isn't the nicest for viewing and sharing.

Fortunately, we can rely on browser APIs and the SVG.toDataURL and canvg libraries for SVG-to-PNG conversion without external tools or server requests.

When the 'Get image' button is clicked, this code inside the click event callback gets the SVG data, following from the example documentation for SVG.toDataURL:

Also note that Snap's Element.node is used to identify the seal SVG (in this case, a nested SVG element) and get a reference to the DOM object to convert with toDataURL.

Looking back, the uws-dwf app evolved in two main phases:

Not much else to it. #simplegifts